Board of Directors – Vice Chair 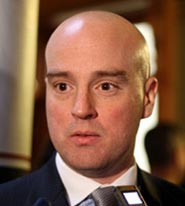 In 1998, Andrew was sworn in as a State Trooper with the Connecticut State Police, in 2000 he was promoted to detective within the State Police Major Crime Unit, and in 2004 was promoted to the rank of Sergeant. Andrew served as the Connecticut State Police Union President from July of 2010 through July of 2018. Prior to being elected President, Andrew was a member of the Executive Board from 2006 to 2010.

In 1993, Andrew graduated with a Bachelor’s Degree in Justice and Law Administration from Western Connecticut State University. In 1996, he received his Master’s Degree in Forensic Science from the University of New Haven. In 2005, Andrew began his legal studies at the Massachusetts School of Law, where he was elected President of the Student Bar Association and was the recipient of the 2008 Deans Award. In May 2008, Andrew received his Juris Doctor degree and in October 2008, he was sworn in as a member of the Connecticut Bar. In Andrew’s private law practice, he represents law enforcement Unions and Associations in employment and labor matters, contract negotiations and other related litigation.

From 2005 to 2012, Andrew was an adjunct Professor at the Manchester Community College, where he lectured on Ethics, Crime Scene Processing and Policing in the Community. In October 2014, Andrew was the recipient of the Gilbert High School Distinguished Professional Achievement Award for the participation, commitment, and leadership he has shown within his profession.

Andrew can be contacted at: amatthews@cspunion.org.