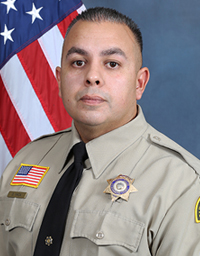 
Sergeant Vaca was shot and killed during a foot pursuit as he assisted deputies with locating a suspect that fled during traffic enforcement. Sergeant Vaca located the suspect and attempted an arrest. The suspect did not comply and a struggle ensued. The suspect then produced a handgun and shot Sergeant Vaca, and he was transported to the hospital where he succumbed to his gunshot wound. The suspect was later killed in an exchange of gunfire with other responding deputies.