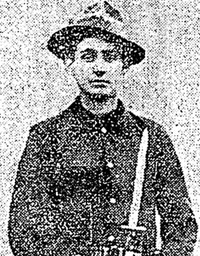 
Patrolman Weber succumbed to a gunshot wound received the previous day when he and his partner attempted to break up a fight. The two officers were walking their beat when they observed four people fighting near Floyd and Woodbine. When the officers intervened, one of the men produced a pistol and shot Patrolman Weber in the chest. The second officer returned fire and wounded the suspect. Patrolman Weber died due to blood loss and uremic poisoning the next day. The suspect was convicted of murder and sentenced to life in prison.