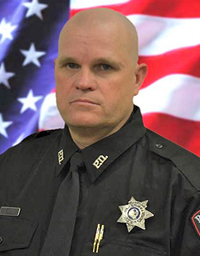 
Police Officer Apple was struck and killed while attempting to make contact with a suspect of a vehicle who was wanted for felony fleeing and felony theft. Officer Apple spotted the vehicle parked in a gas station parking lot and was intentionally struck while approaching the suspect’s vehicle. The suspect was later arrested and charged with capital murder and other felonies.