The NLEOMF concluded another successful IACP Conference today. Foot traffic at our exhibit booth was a little lighter than the past two days, but remained remarkably strong. Staff really enjoyed seeing long-time friends and supporters and meeting so many new people, especially members of the Colorado law enforcement community who had a strong presence throughout the Conference.

Kevin Morison, NLEOMF Senior Director of Communications, attended – or at least tried to attend – a workshop entitled “If You Only Knew What Your Body Language Was Saying.” Presented by well-known body language expert Janine Driver, the session was SRO by 7:45 am – 15 minutes before the official start time. A former ATF agent, Janine has been presenting at IACP Conferences and PIO Section meetings for the past few years, and has been drawing a large and devoted following of law enforcement officials who appreciate her humorous and no-nonsense approach to dissecting their own body language and the messages sent by suspects. Kevin (and others) should remember to get there early for Janine’s presentations next year. 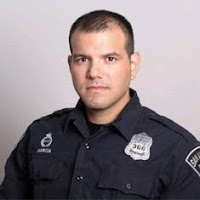 During the Second General Assembly, the IACP and Parade Magazine presented the 2009 Police Officer of the Year Award to Officer Pedro Garcia of the San Antonio (TX) Police Department. Last September, Officer Garcia responded to a shooting scene in which a suspect armed with an AK-47 rifle was firing repeatedly from inside his home, targeting the first officers on the scene. Officer Garcia dodged the hail of gunfire to reach fellow Officer Brandy Roell, a 30-year-old mother of three who had been on the job for just one month and was bleeding profusely from a gunshot wound to the back. Without regard for his own safety, Officer Garcia flung Officer Roell over his shoulder and carried her to a waiting patrol car so she could be airlifted to the hospital, where she underwent life-saving surgery. Typical of a law enforcement officer, Officer Garcia, in accepting the award, said simply, “the true heroes are those who put their lives on the line every day.”

Later in the day, Kevin Morison was interviewed by IACPtv, a video news team that has been gathering stories throughout the conference. Kevin provided an update on line-of-duty deaths in the United States (they’re down 7% this year and are on pace to break a five-decade low) and efforts to build the first-ever National Law Enforcement Museum. He reminded chiefs that the U.S. Department of Justice has authorized them to designate a portion of their federal Asset

Forfeiture funds to support the Museum project. Chandler (AZ) Police Chief Sherry Kiyler recently directed some of her Asset Forfeiture funds to the Museum, making her the latest chief executive to do. The IACPtv segments are shown at the Convention Center and in many of the host hotels for the IACP conference. They are also posted on the IACP website (Kevin’s segment is expected to be posted soon).

The NLEOMF extends our thanks to the IACP Executive Director Dan Rosenblatt, officers and staff for putting together another extraordinary conference, and to the Denver Police Department and the city of Denver for being such gracious hosts. And special thanks, of course, to all of our friends and supporters who stopped by to thank NLEOMF staff for our work in honoring and remembering America’s law enforcement heroes. We’ll see all of you in Orlando, FL, for IACP 2010, October 23-27, 2010.