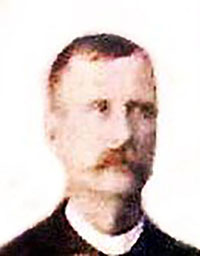 
On November 21, 1900, Sergeant Kent inadvertently shot himself with his own gun as he attempted to shoot an aggressive, vicious dog that was reportedly threatening people in the neighborhood. As Sergeant Kent drew his weapon, it snagged in his clothing and discharged. Sergeant Kent sustained a gunshot wound to the groin and was transported to the hospital where he died a week later on November 28th.