The NLEOMF extends its deepest sympathies to the family members, friends and colleagues of Stephen Tyrone Johns for his tremendous display of heroic sacrifice yesterday inside the hallowed grounds of the United States Holocaust Memorial Museum. 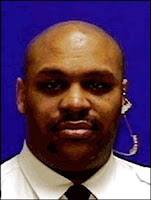 Mr. Johns – “Big John” to many, for his large stature and friendly demeanor – was a special police officer employed by Wackenhut Services who provided security at the Holocaust Memorial Museum in Washington, DC, for the past six years. Yesterday, shortly before 1 pm, Mr. Johns was gunned down at the entrance to the museum by an 88-year-old, avowed white supremacist armed with a rifle.

“Upon entering the front doors of the museum, he raised the rifle and started shooting,” DC Metropolitan Police Chief Cathy Lanier told reporters. Before he could draw his own weapon, Mr. Johns was struck by a bullet and died a short time later at nearby George Washington Hospital. Other security personnel immediately engaged the gunman, striking him down and courageously preventing others from being injured. He was admitted to the hospital in critical condition and has been charged with the murder of Mr. Johns.

Describing Mr. Johns as “a wonderful individual . . . a truly jovial human being,” Holocaust Memorial Museum Director Sara Bloomfield said he “died heroically in the line of duty.” Flags at the museum were lowered to half staff, and security officers wore black mourning bands across their badges.

The Museum, located just off the National Mall in southwest DC, has special meaning for the law enforcement community. Back in 1999, then Metropolitan Police Chief (and now Philadelphia Police Commissioner) Charles Ramsey joined with the Holocaust Memorial Museum and the Anti-Defamation League to launch a training program called “Law Enforcement and Society.” That program uses the museum and the Holocaust as a “learning laboratory” for exploring law enforcement’s unique role in our free and democratic society. Every MPD recruit and experienced officer goes through the program, and it has been expanded to several suburban and federal agencies, including the FBI.

As a result, the vast majority of officers who responded to yesterday’s tragedy – Chief Lanier among them – had not only visited the Holocaust Memorial Museum, but had trained there and understood its significance to the community. Ms. Bloomfield put the incident into a broader context: “This speaks so powerfully to the mission of the museum, which is that hate is still with us, and this is why the museum exists.”

The United States Holocaust Memorial Museum has established a special fund for the benefit of Stephen Johns’s family. Learn more and contribute.